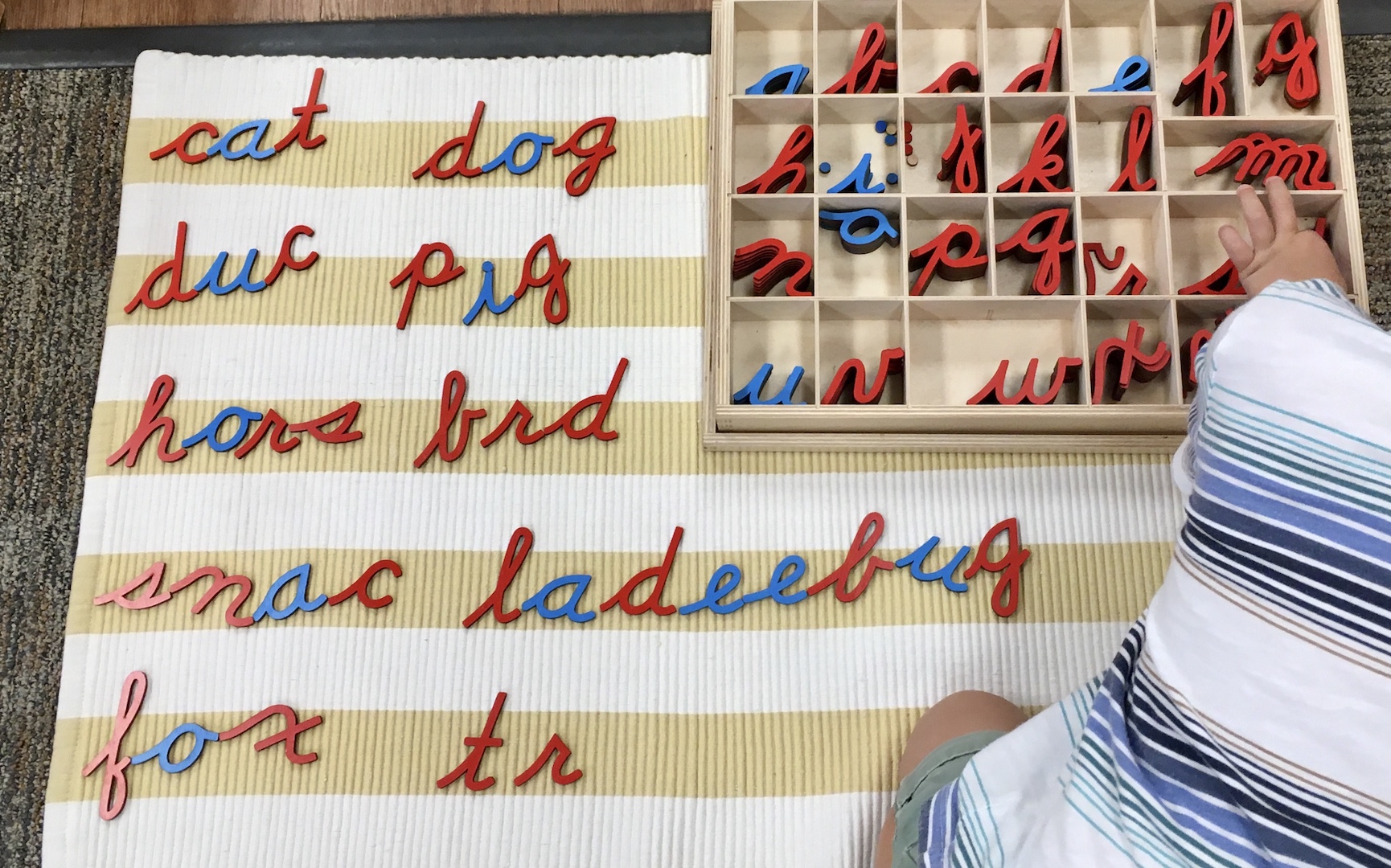 In the Montessori approach, we introduce writing as the process of expressing one’s own thoughts using the symbols of our language (the alphabet). Traditionally, we associate writing with a child using chalk and a chalkboard or pencil and paper as a way to make words or phrases. In actuality, the process of writing involves much more than the ability to hold a writing implement!

In order to write, a child first needs to have an idea she wants to share. She must be able to organize these ideas into a clear and ordered way so that she can communicate her thoughts in a way that makes sense. She also needs a rich vocabulary from which to pull the precise words needed to convey these ideas. Spoken Language activities achieve each of these goals.

Next, the child must understand the process of writing as putting sounds together to make words. The child needs to know the letter symbols and the sounds they make, and understand how to put them together in a particular way to create words, phrases, and sentences.

Also, the child must learn the mechanics of writing. She must build the musculature in her hand, master the use of a writing implement, learn how to form each of the letters within a word, and then string together the letters to make the words of her story through handwriting practice. Each part of the primary language curriculum is designed to equip the child with these exact capabilities.

Here are a few activities that support the process of writing: 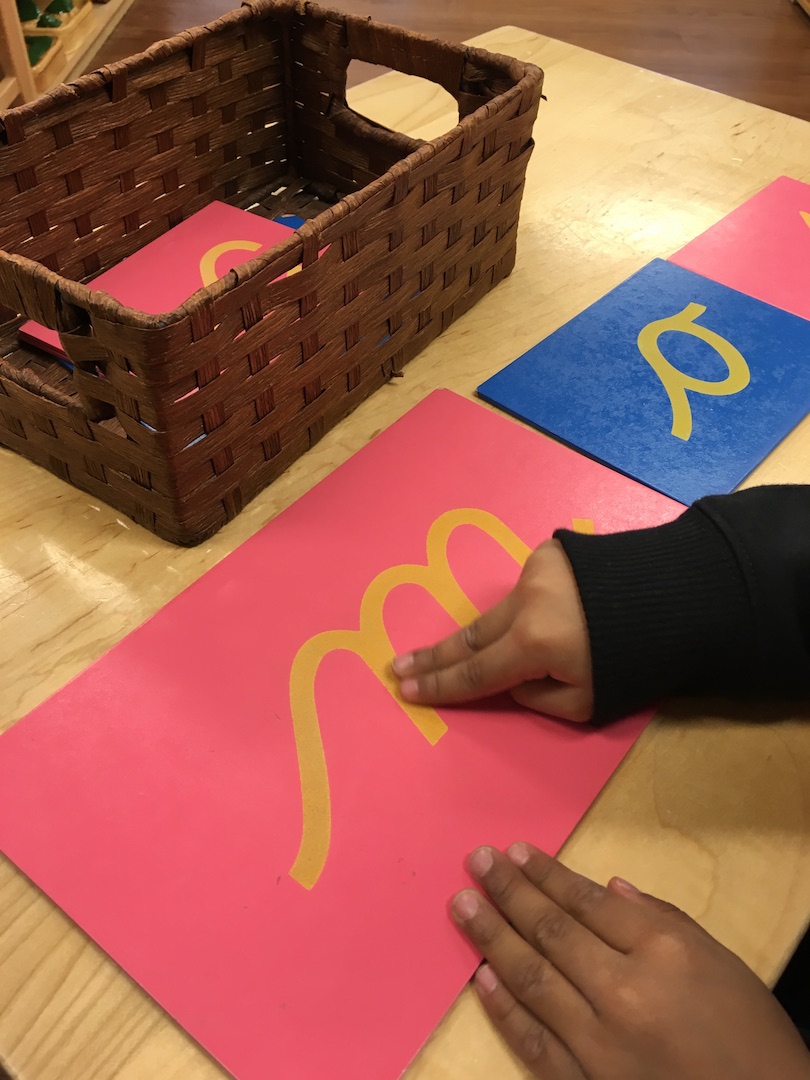 In the classroom, we Introduce the children to the cursive symbols and their associated sounds using the cursive sandpaper letters. We offer three-period lessons with this material to help the children build their ability to recognize the symbols as well as see and feel how the letters are formed.

Consonant/Vowel Sound-Symbol Association ages 3 and up

Directions: Print out the cards in the Cursive Letters for Home. Introduce the children to these letters three at a time following the guidelines in Three Period Lessons with Letters . The Cursive Letters for Home cards are arranged in groups of three to offer some guidance as to what sounds to introduce together. Try to introduce the letters each day. After the first day, begin by reviewing the sounds/symbols that the child remembers. If there is one he or she has forgotten, simply review it again in the day’s lesson.

Phonogram Sound-Symbol Association  ages 3 ½ and up 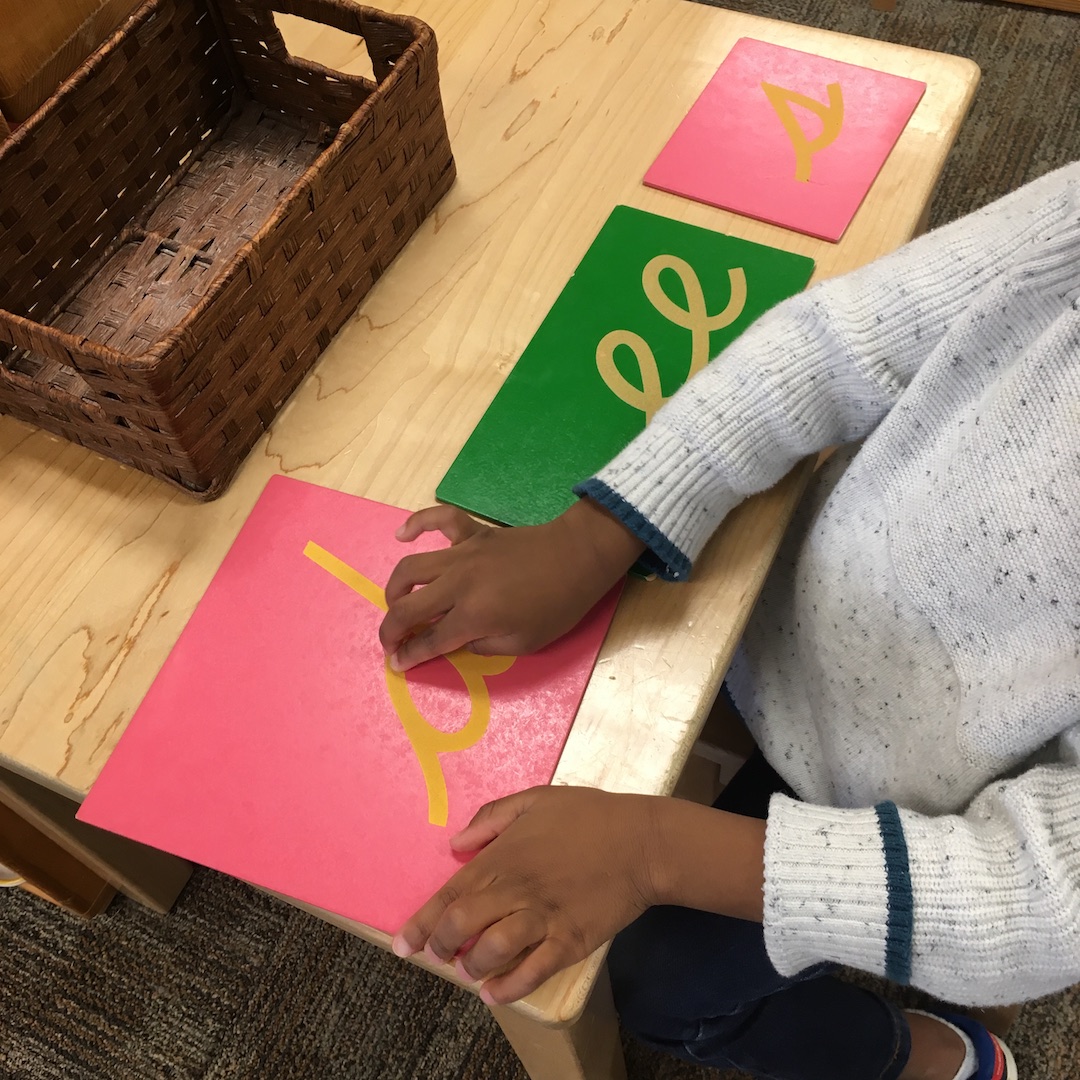 Directions: Print out the cards in the Phonograms for Home document. Introduce the children to these phonograms/digraphs three at a time using three-period lessons. The cards are arranged in groups of three to offer some guidance as to what sounds to introduce together. These sounds should be introduced as the child demonstrates a good grasp on the pink and blue (consonant and vowel) letters. 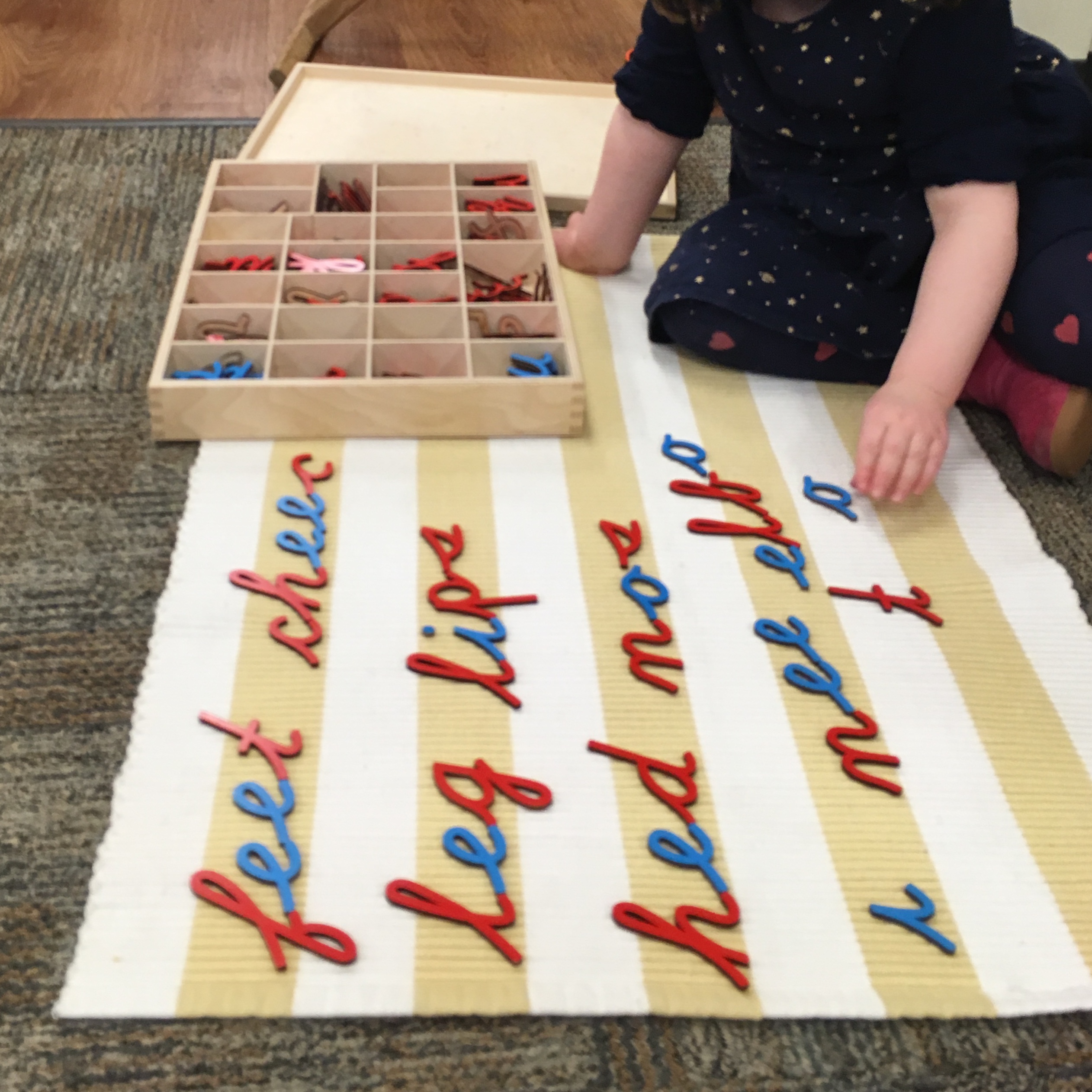 Many children are ready to write- knowing many of the cursive letters and the associated sounds- well before their hand is prepared to physically form all of the letters in a word. Rather than slow down the process of writing, we offer the child a Moveable Alphabet: a box of letters that can be placed on a rug to make the desired word. A child can then write by:

1. Thinking of the word
2. Identifying the sounds in the word
3. Finding the cursive letters that make these sounds in the box
4. Placing these letter sounds together on the rug to make the word.

The Moveable Alphabet allows the child to write WITHOUT the added difficulty of also having to hold a pencil and form the letters.

Here are a few activities for work with the moveable alphabet:

At Home Moveable Alphabet ages 3 ½ and up

Directions: Print and cut out the cursive letters. Print multiple sheets if needed. Put the letter sounds together to make words. The words should be made phonetically using the sounds the child knows. Sometimes it helps to have a category in mind to help spur ideas. Consider beginning with animals and make phonetic words such as “cat, dog, pig, bug, and rat.”

At Home Moveable Alphabet Extension Activities ages 3 ½ and up

Directions: Cut out the pictures and the cursive letters. Think of the sounds in the word shown in the image. Put the letters together to make the words. Use the control chart to check your work. Note: This activity is useful if your child has difficulty thinking of words to write with the alphabet independently.

Writing and Drawing ages 4 and up 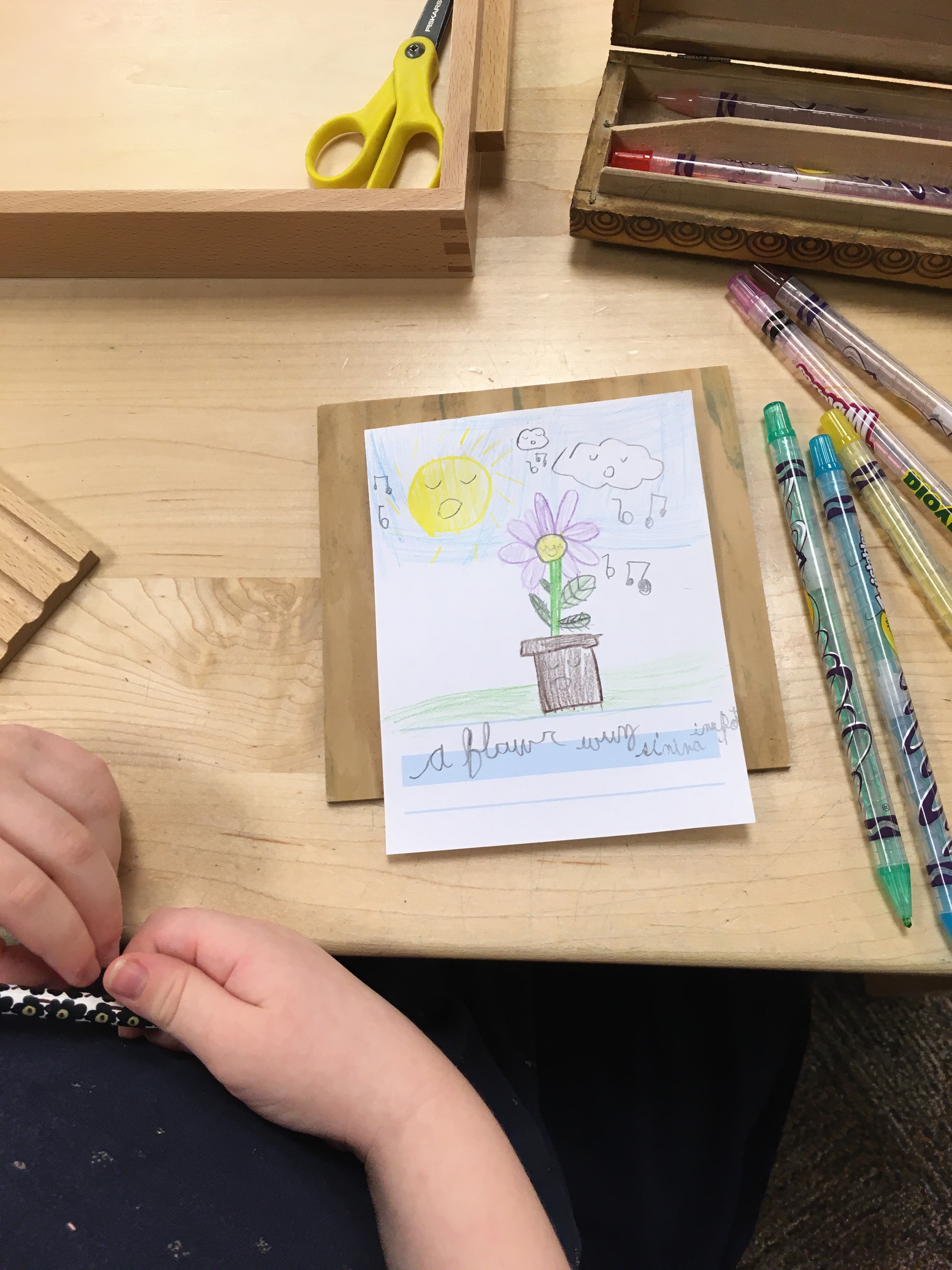 Directions: Look out of the window. What do you see? Write and illustrate what you observe using the Writing and Drawing Paper paper.

Story Writing ages 4 ½ and up

Directions: Take a moment to think about your favorite memory. Write a true story describing what happened during this special moment using the Story Writing Paper. Consider answering the following questions: When did this activity happen? With whom did you enjoy this activity? Where were you when this special moment occurred? What happened? How did you feel during this time? Why was it such an excellent memory? Write your story on as many pieces of writing paper as needed to tell your story. Take time to include illustrations too! Use colored pencils to illustrate your story. Read your story to a friend or an adult when you are finished. 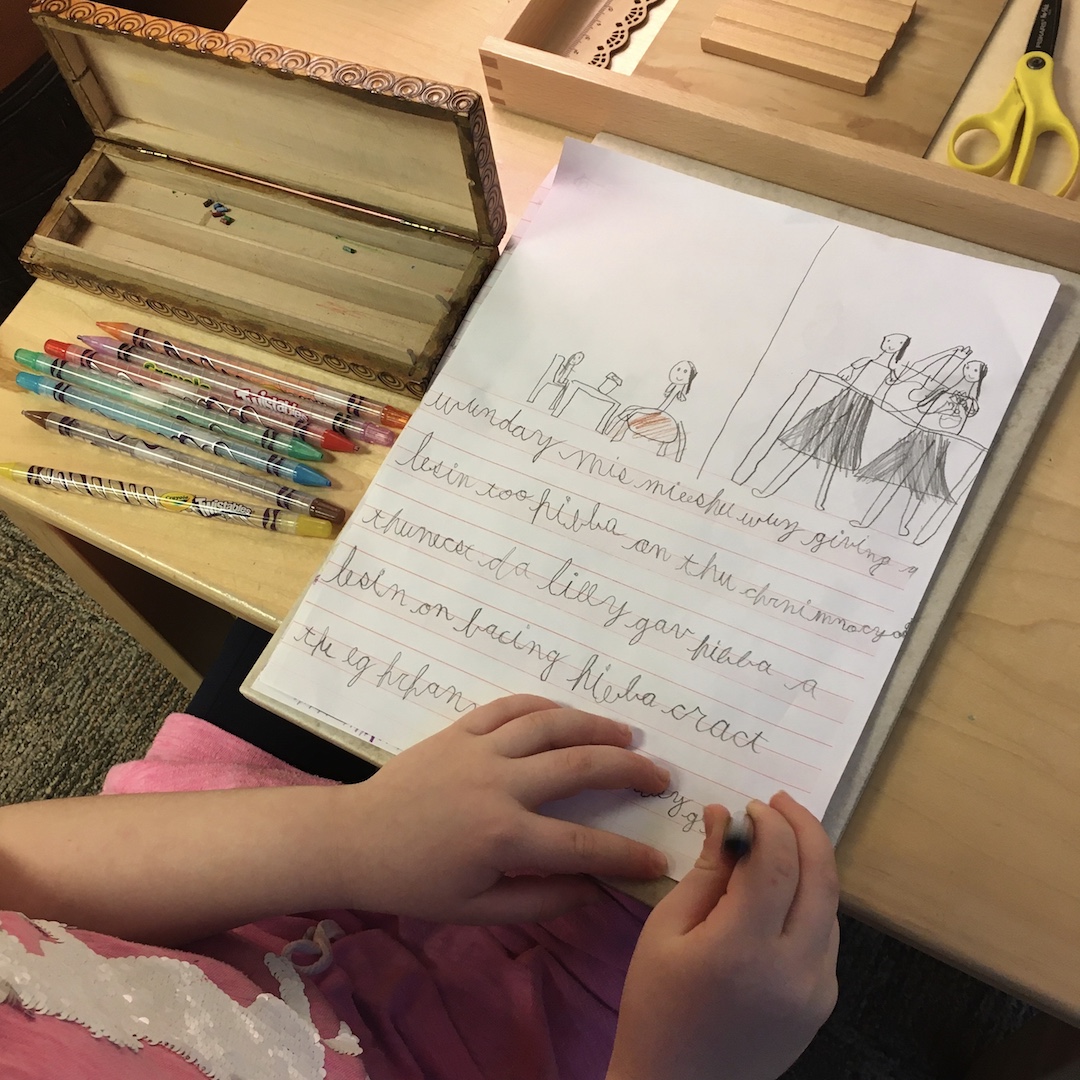